Mirjam 't Lam presents a memento to Brij Mohan with “Heartfelt thanks for your support and guidance as Director in the Board of Maanaveeya during our growth journey 2012 to 2022”.

Brij Mohan is the former Executive Director of Small Industries Development Bank of India (SIDBI) and the founding Chair of ACCESS Development Services.

Focusing on social impact, he has played a key role in building important players in the microfinance sector which has contributed to the sustainable growth of the microfinance industry, in India. Since 2015, Brij has been the guiding force on the Maanaveeya board, the Indian subsidiary of Oikocredit, and has made an immense contribution to the development of Maanaveeya over the years.

Dubbed the father of microfinance in India, we spoke to Brij about his passion for the microfinance sector and its impact on the lives of disadvantaged women in India.

How long have you been working in the microfinance sector?

My career started as a government official heading up a small department in the planning commission. This wasn’t for me, and so I moved to the Industrial Development Bank of India and later to its subsidiary SIDBI where I served for 24 years. There I worked with many non-government organisations trying to help them with enterprise training, marketing assistance and technology improvement, but I began to feel that I was not adding anything.

Often, other bankers were not willing to look at new ideas, and they felt we were an unnecessary interference in the normal banking world. This got me thinking that we should set up a pure, friendly banking system, and that’s how I found myself in the world of microfinance.

How have you seen the sector develop over time?

When I started in 1994, there was only one small institution with one branch, so it was almost a blank slate at that time. Now, the microfinance sector in India is part of a very large ecosystem with 66 million clients including several banks and strong non-bank finance companies. So from that angle, so much has changed from where we started and where the sector is today.

What differences have you seen microfinance make to people’s lives?

There are so many individual stories to share, but for me, the most inspiring thing is to see change in society as people take control of their lives. For women in particular, I have seen that their respect within the family rises. They become part of the household decision making, in a way they had not been before. Initial loans enable women to buy a mobile phone, a bike or kitchen items like a gas cooker.

As women gain respect and self-confidence, I have seen that more attention is given to children’s education, especially girls. It is usual for boys to be educated but girls often miss out on essential schooling to save on family expenses. The loans are also used to make home improvements such as adding sanitary facilities, improving life for everyone.

In addition, interaction in groups leads to growth in dignity and self-belief which in turn improves livelihoods. Women are empowered to take direct action whether it’s contesting elections on the village council, or contacting district authorities to request improved roads or complain about the lack of electricity connection.

How do you see Oikocredit and Maanaveeya contributing to this? Why is our role important?

Wholesale banks don’t lend to certain groups of people and are often unwilling to give very small loans. So Maanaveeya plays a role in supporting these people and enterprises while ensuring that the financial benefits are widely distributed and do not result in the enrichment of only a few.

In line with the good practices of Oikocredit, Maanaveeya also strengthens communities in a horizontal way through capacity building. So it is not only about the money. It is also about building confidence, building strength and building capabilities.

Being part of the evolving microfinance sector in India for over 28 years, what do you think can be done to achieve better results and impact at the client end?

We now want to move people to a place where they can build an enterprise, where they can take greater risks. For us the question becomes ‘have we really raised their status?’ Things cannot remain simply at the sustainable level. And we are trying our best to make this enterprise growth happen and develop inclusive finance that includes things like good healthcare and low-cost housing.

Recently you’ve been talking about ‘micro equity’, can you share more on that?

Women entrepreneurs face challenges to their growth and profitability through lack of access to capital and lack of confidence that they can run better and larger enterprises, sometimes employing one or two people. Micro equity is about taking equity positions in, rather than making loans to, enterprises in low-income communities.

In practice, it’s about giving our clients the means to push towards this larger enterprise. We must take the first step to facilitate the amounts that will help them to make larger, higher risk and return investments by providing the required capital for enterprise growth. This will raise their status and enhance their income.

As a converted banker, I have seen how money can change lives, but I have also seen how many people are not served by the system. Microfinance addresses that gap. 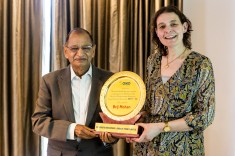 Mirjam 't Lam presents a memento to Brij Mohan with “Heartfelt thanks for your support and guidance as Director in the Board of Maanaveeya during our growth journey 2012 to 2022”.