How can access to finance help dreams become a reality? We follow the story of Carlos Cajas and his son, Esteban, who established a family business that transformed their lives and positively impacted their community.

Sitting on a plateau surrounded by Ecuador’s stunning mountains, you will find the city of Cuenca. Though rich in culture and beauty, inflation and unemployment have affected this region over the last couple of years.

For Carlos Cajas, who resides in Cuenca with his family and has struggled in the past to make ends meet, inflation and unemployment are concepts he is familiar with.

Carlos and his wife worked as migrants in the United States before returning to Ecuador to be with their family. Upon his return, Carlos struggled to find work. But Carlos noticed that he wasn’t the only one desperate for employment: so were several of his family and community members.

Carlos was determined to change this and decided to join forces with his son, Esteban, and start their own company, Talleres Cajas.

Talleres Cajas specialises in fixing household items and manufacturing structures for large real estate projects, but it wasn’t always a thriving business. In order to kickstart and sustain their business, Carlos and Esteban needed financial support.

So Esteban introduced his dad to Oikocredit partner Cooperativa de Ahorro y Crédito Jardín Azuayo Ltda (Jardín Azuayo). Jardín Azuayo is a savings and credit cooperative based in Ecuador. It provides financial and non-financial services to employed individuals and urban and rural micro entrepreneurs, who also become members of the Jardín Azuayo cooperative.

Esteban, who was already a member of Jardín Azuayo, decided to approach the cooperative about the new family business. After hearing their story and seeing their potential to make a positive impact in their community, Jardín Azuayo offered Carlos and Esteban a loan to establish Talleres Cajas.

Carlos used the loans to acquire land and purchase machines for the workshops. Unfortunately, the machines came late, and this resulted in a rocky start for the business. Carlos, who was already on a tight budget, had to pay rent on a property that wasn’t bringing in any income.

But Jardín Azuayo didn’t give up on Carlos and Esteban and continued to support them. Not long after the machines arrived, the business grew rapidly. The introduction of the machines broadened the market of Talleres Cajas and increased its profits. Now the business provides services to various small- and large-scale companies.

The growth was so significant that the need for more employees could not be ignored. Carlos was then able to hire his daughter and eight others from their community. 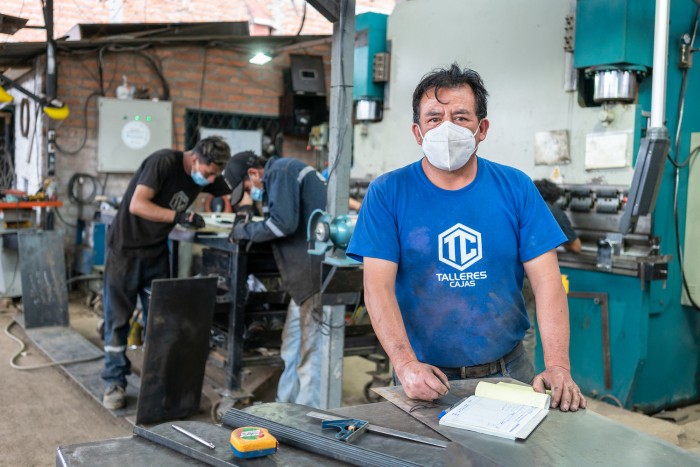 Unemployment for the Cajas family was no longer an issue.

Esteban, who has now been a member of Oikocredit partner Jardín Azuayo for over seven years, said: “This has been a great benefit for the whole family. Thanks to [Jardín Azuayo] we have stable work and the possibility of a better future.”

Oikocredit partners with organisations like Jardín Azuayo with the aim of making financial services more accessible to entrepreneurs like Carlos and Esteban.

Esteban emphasises, “[If it weren’t for Jardín Azuayo] I would not have had funds for my business. We were able to open our workshop in partnership with my family thanks to the loans from Jardín Azuayo.”

Through this loan and their entrepreneurship, the Cajas family has secured a better future. The needs of other individuals are also being tended to as Talleres Cajas workshops provide income, employment and added skills to its employees.

Stories like that of the Cajas family are why Oikocredit invests in partners like Jardín Azuayo. As a cooperative, Jardín Azuayo takes care of its members. It also shares its knowledge with smaller savings and credit cooperatives, embracing the spirit of cooperation and solidarity within Ecuador's financial inclusion community.

By supporting partners like Jardín Azuayo, Oikocredit helps them offer the right kind of support to families like the Cajas, enabling communities to thrive.