Last week Oikocredit held its 45th Annual General Meeting (AGM) in Amersfoort, the Netherlands, with members and others participating through a web-based conferencing and electronic voting system.

For the second year running, the AGM was held as a hybrid meeting with only a small number of participants gathered at the Oikocredit office in Amersfoort, the Netherlands, due to the extraordinary circumstances of the coronavirus pandemic. Supervisory Board member Maya Mungra chaired the meeting and around 90 member representatives participated and voted online.

The members approved the annual accounts for 2020 and discharged the Managing Board and Supervisory Board for their respective activities in 2020.

Proposals approved at the AGM included:

Three new members were elected to the Members’ Council: Aglaë Hagg, Peter Koona Tefo and Matthias Lehnert. Christiane Riffaud was elected for a second term. Five members, whose second term ended, left the Members’ Council: Ulrike Chini, Polisi Kivava Baudouin, Huub Lems, Emmanuel Muhozi and Hans van Nie. They had served on the Members’ Council since its foundation in 2016 and members thanked them for their work in establishing and further developing the role of the council. 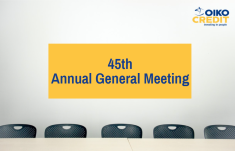