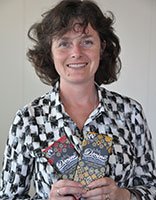 As an equity partner of Divine Chocolate, Oikocredit has one seat on the Divine board, along with members of Kuapa Kokoo and various other social enterprises. We spoke with Divine Chocolate managing director, Sophi Tranchell, who recently visited the Oikocredit International office to talk about the work she’s been doing and Divine’s collaboration with Oikocredit.

Has Oikocredit’s participation at board level contributed to Divine’s strategy or performance?

“Yes it has. Oikocredit has been a very supportive partner of Divine, contributing to the professionalization of the company. Oikocredit has taken an active role in our corporate strategy which in turn has helped our overall performance. Our board meets four times a year – three times in the UK and once in Ghana. Oikocredit has always been active in decision making and also participating in visits to villages or cocoa farmers when in Ghana. The fact that Oikocredit people take the time to meet and speak with the cocoa farmers of Kuapa Kokoo means they understand our work and contribute in a positive way.”

What’s it like having both Oikocredit and Kuapa Kokoo on the Divine board?

“We see it as a very positive thing. Having Kuapa Kokoo on the board gives farmers a voice and enables them to speak as equals. Oikocredit also being a partner of Kuapa Kokoo means it understands their concerns and can relate to them on a different level.”

What qualities does Divine value in a shareholder?

“We refer to Divine as “patient capital”, meaning an investment is more long-term. Our mission is social, much like Oikocredit’s, and that is something we look for in a shareholder. We hope to share our mission and values with our shareholders and help them understand where cocoa comes from and why it’s an important sector which needs protecting. We want our shareholders to join in the journey of Divine and see the benefits for fair pricing for cocoa farmers. Of course, this is also something we see in Oikocredit, as a long-term social investor that cares about the cocoa producers of Ghana.”

What’s next for Divine and Kuapa Kokoo?

“Last year we helped Kuapa Kokoo launch a radio programme to reach out to its 65,000 members. The programme was such a big success that it will run again this year. We’re also assisting Kuapa Kokoo incorporate women as part of its core strategy and also empower women to become cocoa producers themselves. Divine will also continue to look at other suppliers across the UK and Europe, as well as grow its presence in the US. And, of course, we’re always developing new and exciting flavours that we will be launching next year.”

Oikocredit is an equity partner of Divine Chocolate, investing £ 500,000 in Divine Ltd. and US$ 1.1 million in Divine Inc. Oikocredit has also provided a credit line to Divine of US$ 1.2 million for working capital. 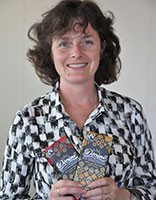