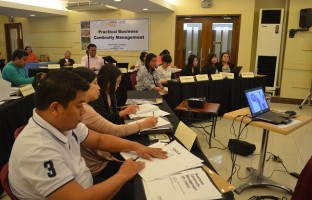 Employees of ASKI take part in the DRRM training programme

It is almost three years since the programme was first implemented in the Philippines, and Oikocredit has now extended the programme to Cambodia, Vietnam and Indonesia and will be rolling it out in Ecuador later this year.

Putting the training into use

As part of the DRRM pilot training programme, Oikocredit partners in the Philippines attended workshops to formulate strategies in line with their own specific needs and draw up contingency and business continuity plans involving local government agencies, schools, churches and emergency services.

“ASKI was able to disburse emergency loans to its clients very quickly because they had already provisioned for the loans as a result of the DRRM training,” says Marilou Juanito, Oikocredit’s capacity building and social performance coordinator for Southeast Asia. “They were able to respond fast because they had policies and guidelines in place and had established a disaster team in each branch.”

Further initiatives ASKI developed through the DRRM training programme included a ‘call tree’, which is a communication protocol for notifying specific individuals in case of a disaster alert. ASKI also gave disaster preparedness training to the communities they work with and distributed to its clients lists of contact details for the closest emergency services and evacuation sites. “Thanks to the DRRM programme, we have seen our microfinance partners going back to business within a day following a natural disaster,” adds Marilou. “Before, it usually took several weeks.”

This week, Oikocredit investors, volunteers and staff members are visiting partners in the Philippines as part of the 2017 Study Tour. Disaster preparedness is one of the topics they will be learning more about on this tour and the group will report about their visits on our blog.

Read more on our blog 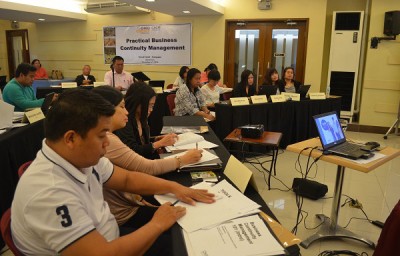 Employees of ASKI take part in the DRRM training programme