Journey of the heart: visiting the Rwanda Tea Seedlings Project

Journey of the heart: visiting the Rwanda Tea Seedlings Project

In this blog, Oikocredit’s Social Performance and Capacity Building Officer for Eastern Africa, Elikanah Ng'ang'a, takes us on a journey from his home in Kenya to Rwanda and reports on Oikocredit’s Rwanda Tea Seedlings Project.

When I was seven years old, we moved to a farm near Aberdare Forest, Kenya. That place was heaven to me. It was nestled in the Aberdare range of mountains just 180 kilometres from Nairobi, where my father worked. In Kenya, like most of Africa, the majority of jobs are found in urban areas, but my father’s income alone wasn’t enough to support our family. The farm was able to produce food for us and the extra income we needed, which meant that my mother had to work the farm while also taking care of us children. My father had to stay in the city for work (which is also common in Africa) but he would faithfully make the effort to come home to his family once a month. And as children, we looked forward to seeing him – and the goodies he brought us.

One night he arrived very late and was covered in mud. When I asked him what happened, he explained that these monthly trips from the city to our rural farm were hard to make. He said that because the roads were rough and not yet developed, the bus got stuck in the mud for hours and all of the passengers had to get out and push, and everyone got covered in mud. On another trip home he had to walk in the dark through the forest where he encountered a herd of elephants. Thankfully he had learnt, by methods passed down from his father, how to scare elephants and was able to pass by without harm.

My father called these journeys his ‘journeys of the heart’. Journeys of the heart are not easy to make but are necessary. They are journeys made out of love and care for the people you travel to meet. My recent journey to Rwanda felt like one of those journeys. It had not been easy due to the spread of the Omicron variant. I had to be tested before I left Nairobi, tested again at Kigali airport in Rwanda and then quarantine for 24-hours. I had been reflecting on my father’s story when our vehicle got stuck on one of the many hills of the Nyaruguru district, in the southern part of Rwanda. Eventually we had to walk the rest of the journey because a small bridge made of logs had given way and we couldn’t proceed.

The Rwanda Tea Seedlings Project was the purpose of my visit. The entire project itself had not had an easy journey either. Fundraising for the project started in 2019 with Oikocredit’s West German Support Association raising most of the € 140,000 needed. They did this to support the propagation of two million high-quality tea seedlings to be distributed to 2,000 low-income farmers. Distribution of the seedlings was planned with two cooperatives: Katecogro and Cothemuki. Both these cooperatives supply tea to our partner, the Karongi Tea Factory. 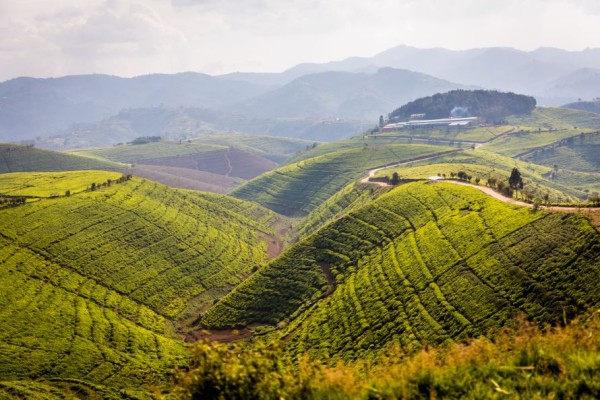 When Covid-19 hit in 2020, we decided to go on with the project despite the new challenges. Developing seedling nurseries did not require many people and the government of Rwanda had allowed agriculture activities to continue. We also knew that the seedlings would take around 18 months to mature and we hoped that Covid-19 would be long gone by then. During 2020 and 2021 the seedlings had done well, and we had distributed 500,000 seedlings by the end of 2020. The greater challenge, however, was to prepare the 2,000 farmers with new skills in tea farming and other aspects, such as coping with climate change and food insecurity, and to do this in alignment with government regulations.

We adapted our capacity building sessions to include the challenges of Covid-19 and farmers were trained in small groups, following the health protocols. We also carried out trainings outside and in the fields. Using a designated lead farmer to coordinate the trainings was key to this new approach. In the end we managed to reach all our farmers, which was a big success. 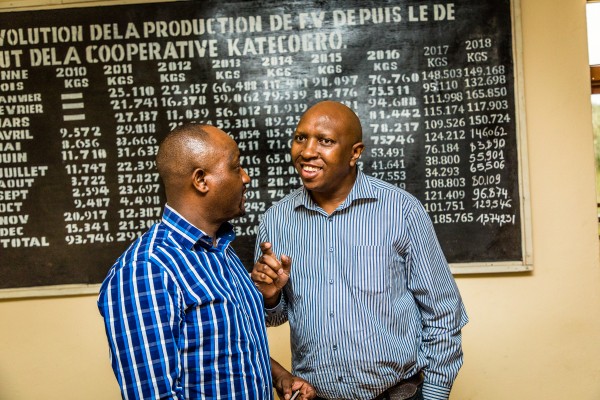 This was my final trip to mark the last phase of the tea seedlings distribution that had begun in November 2021. The project had been going as planned except in one area in the Karongi district that, despite other parts of Rwanda having rain, had remained dry. About 600 of our farmers come from this area and were yet to receive their seedlings when I made the trip. The manager of Katecogro was shocked and told me: “It always rains in this region in November and December, every year! But not this year.” She suggested that it was probably a result of climate change.

That night I thought of the many farmers who had prepared their land, waiting for rain and looking forward to planting the tea seedlings. I felt very sorry for them. Then it happened: rain began to pour! Soon I received a call from an excited manager: “Tomorrow, come prepared,” she said. “We are going to start distributing the tea seedlings to the remaining farmers! The rain has come.” So the very next day, I was with the manager planting tea seedlings with a group of excited farmers.

One of the aims of this trip was to evaluate if we had achieved our project objectives.

The evalutation was done by talking to the management of the two cooperatives and the tea factory on the development of the seedlings, and by visiting farmers that had received the seedlings. Interviews were conducted with the farmers to understand what they had learnt and the level of satisfaction with the project.

After listening and observing what was going on during my trip, I can say with confidence that we met our objectives and much more. In the world of development, we sometimes concentrate too much on the numbers. But it is good to go beyond the numbers, so I enjoyed getting to know the farmers and hearing stories like Jeannette’s.

Jeannette, a mother of seven children, talked to me about her passion for the project. She told me that for many years she had been a tea picker and had never dreamt of owning a tea plot herself. But with inspiration from our project, she decided that 2020 could finally be the year that she could go beyond plucking and into farming. She utilised all of the insights and support from the project – including the seedlings – to set up a tea plot on her farm. She told me how she had learnt how to make compost and how to do mixed farming to ensure the family has enough food as she waits for the tea plants to mature. Her farm also grows beans and has a cow.

Jeannette also told me that since tea farming had been introduced to the district, charcoal burning, which the government has discouraged because of the environmental damage it causes, also reduced. She explained that before all the tea farms were here, there were less sources of income and it was very common for rural communities to cut down trees and burn them to make charcoal, which they then sold to urban areas. But now that there are more tea farms in the area, community members have alternative sources of income and charcoal burning has reduced.

This will save a lot of trees and will be good for the environment. Jeannette now sees a bright future for her seven children as the tea bushes will continue to give her income for the next 30, 40 or even 50 years.