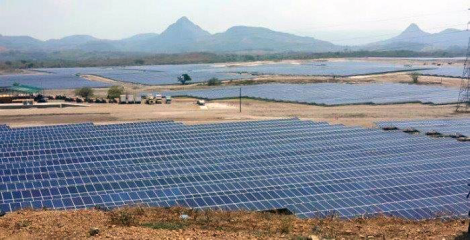 In the first quarter of 2016, Oikocredit’s renewable energy team completed an investment of US$ 11 million in Compañía Hondureña de Energía Solar, SA de CV (COHESSA). COHESSA is a solar energy company established to build, own and operate a large-scale solar power plant named ‘Valle Solar’, in the province of Nacaome in southern Honduras. Honduras is the second poorest country in Central America, with around 63% of people living at or below the national poverty line*.

Oikocredit’s investment forms part of a US$ 120 million project with the International Finance Corporation (IFC) to construct and equip the Valle Solar photovoltaic (PV) plant and put it into operation. Valle Solar will therefore provide more reliable, cleaner and less expensive sources of energy to Honduras. This investment is in line with Oikocredit’s renewable energy strategy, which focuses on sustainable investments with a high development impact.

Oikocredit renewable energy manager, David ten Kroode, said: “The Valle Solar PV project is a significant step for Honduras on the road to diversifying its energy mix away from imported fossil fuels. The project is expected to generate 122 GWh per annum, which can meet an estimated 7% of the country’s electricity demand. We are excited about participating in a solar project of this scale together with IFC as it will have a significant impact on Honduras’s infrastructure and huge environmental benefits in avoiding CO2 emissions.”

In 2014, COHESSA signed a 20-year power purchasing agreement (PPA) which will ensure a long-term buyer of all the solar power plant’s clean energy into the Honduran grid. The PPA is part of a wider strategy to diversify Honduras’s electricity matrix to reduce the country’s dependence on thermal power plants.

Valle Solar is expected to provide clean energy to more than 71,000 homes. The Honduran government expects that by 2025, 75% of Honduran households will use clean energy. In addition to reducing the country’s dependence on imported fossil fuels, the project generated about 400 jobs at the peak of construction and a workforce of 20-30 jobs during its current operational phase.

Oikocredit’s investment in COHESSA is part of its renewable energy strategy which aims to contribute to the transition from high-carbon fossil fuel energy to renewable power. Oikocredit’s renewable energy portfolio consists of both off-grid projects and larger infrastructure projects such as COHESSA. Small off-grid projects include partners like Barefoot Power, BBOXX and Thrive Solar, companies engaged in the manufacturing and distribution of low-cost, solar-powered lamps and systems for low-income earners in areas where there is little or no access to electricity.

*According to the World bank: http://data.worldbank.org/country/honduras