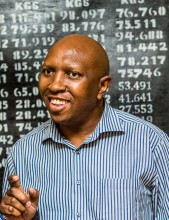 Written by Elikanah Ng'ang'a, Social Performance & Capacity Building Officer - Oikocredit Africa
The Water Man story tells of one man’s determination to bend the Covid-19 curve, and provides lessons for Oikocredit partners, staff and investors. In this first part of his blog, Elikanah writes about how the Water Man inspired him and other Oikocredit staff in the Oikocredit office in Kenya.

It’s mid-May and as I retired to my usual chair to watch the evening news, my thoughts rest heavier than on any other day since the Covid-19 outbreak in Kenya. One reason could have been the rapidly growing number of cases in the Nairobi informal settlements, particularly in Kibera slum. As the largest urban slum in Africa with close to one million people packed together, social distancing is near impossible. I lived there 23 years ago when I was jobless. Later, I made good friends with microenterprise owners in Kibera when I worked as credit officer for a local MFI.

Watching the TV, I was desperate to hear some good news, but the news started with the familiar update of Covid-19 statistics. Then followed warnings from the government of what may happen if people do not obey Ministry of Health guidance. The government had restricted movement in the cities of Nairobi and Mombasa, plus four other counties that had registered high numbers of Covid-19 cases and had instituted a night curfew. The news told a story of a young man who had travelled 300 km from Mombasa to Machakos, avoiding various police roadblocks, only to unfortunately spread the virus to his sister.

As the bad news continued, I thought this was going to be another day that will end without any glimmer of hope. To shield our young children from bad news about Covid-19, my wife and I had agreed to watch only one news update each day at nine o’clock. To calm the kids before going to bed, we read them bible stories. On this evening, I was just about to switch the TV off early so that we may start reading the story to the kids.

Then it happened, the good news I was so desperate to hear. It was the story of John Njenga, a man Nairobians call “the Water Man”. Before Covid-19, John Njenga had a job, and like more than 1.3 million others in Kenya was made unemployed by the pandemic. He was a school bus driver when Covid-19 struck, the school was closed and he lost his job. Luckily, John’s wife had the income from her market stall which was allowed to remain open as the market operates in the open air.

What struct me most about John Njenga’s story, is that he did not lock himself away in his house and lament an invincible virus. He decided to do something about it and help to bend the now famous Covid-19 curve. Using his small savings of around € 40, he bought a 200-litre water tank and four smaller 20-litre water containers and headed to the Nairobi city centre. One of the protocols to flatten the curve is good hygiene measures and John knew that Nairobi suffers frequent water shortages. Only the previous day, it was announced that due to the heavy rains in some catchment areas, the pipes had broken and some sections of the city would not have water.

John was granted permission by the city’s Director of Public Health to place his water tank in a strategic place where he knew thousands of people passed by and could now wash their hands. John used the small water containers he had bought to fetch water from another part of the city to fill and regularly replenish the tank. The refilling could go on for hours under the sweltering heat of the sun.

Bus fares were increasing due to social distancing on the bus, so John had to walk part of his refilling journey to save on bus fares. He says that despite the sacrifice he makes every day, sometimes on an empty stomach, what gives him joy is to see many people washing their hands using the water that he fetches. He says if he can contribute something to flatten the curve even though it is small, it will make a difference. And as John says: “If it is just one person that I help to not catch Covid-19, this could be the person who may have super-spread to others”. The story was very motivating for me. Here is a jobless man using his only savings to try to make a difference and flatten the curve.

You can watch here John’s story “The Water Man”, as reported by Citizen TV.

In April, Oikocredit staff in Kenya collected around € 700 to buy food for our fellow Kenyans who had lost their source of livelihood, but I now feel that this is nothing compared to the efforts of John Njenga. Most of my colleagues in Kenya have also taken it upon themselves to use their income to support relatives who have lost their jobs during this time. But even this is nothing compared to what the Water Man was doing for people who are neither his relatives or friends. We gave out of our abundance, but John gave out of his poverty.

John’s story showed me that we are not hopeless in this fight and each person can give something. It could be food, water, soap, a mask, or a mobile phone so that digital payments can be made. And it also could be knowledge, like some consultants have done during this time of Covid-19, by not charging for their services. It could also be an investor who ensures that there are funds available to finance businesses to survive this period.

In the last three months, Oikocredit colleagues have been in touch with partners almost on a weekly basis to try and support them. The Managing Board have pre-approved measures like repayment holidays and contract waivers, so that partners can survive this difficult time and serve their end-clients for the future.

There are colleagues who have fundraised so that we can be in solidarity with partners who are giving masks and other PPE (Personal Protection Equipment). We have also seen colleagues sharing knowledge through webinars. So, although we may not be called to carry a heavy water tank in downtown Nairobi, right where we are, we can contribute something to mitigate the impact of Covid-19.

In the second part of my Water Man blog, I would like to show you what our partners have done. My colleagues and I have compiled some great examples of solidarity to share with you.